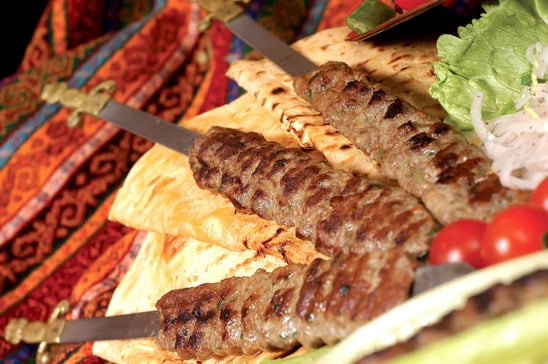 The Republic of Turkey has many proud and storied traditions, which include a historic and expansive empire; “Kahve,” or coffee houses, which, contrary to popular belief, are most certainly Turkish in origin; and, among many others, a cuisine that has tantalized the taste buds of billions. One of Turkey’s top dishes is one that is now starting to catch on around the globe: Adana kebab.

The Origins of Adana Kebab

Think of Adana kebab much like Italian sausage. Not in the sense that the ingredients are similar, but more in the sense that Italians simply call it “sausage”; it’s the non-Italians who put the “Italian” in front of it. The same can be said about Adana kebab. Adana, the birthplace of this item, is the fifth-largest city in Turkey, and within this city the kebab is simply called kiyma. To other Turkish citizens and those familiar with the culture, the item is known as kiyma kebab – a minced meat kebab that some food aficionados may find shares a lot in common with the Greek gyro.

Though with the unique flavors, the amount of fat used in the recipe, and the process of hand-mincing fresh meat, Adana kebab stands out as wholly unique in texture, flavor and appearance. Slowly but surely, more and more kitchens outside of Turkey are starting to prepare this dish for their families.

How Adana Kebab is Prepared

Adana kebab is traditionally made by hand-mincing meat, spicing it, and placing it on a long iron skewer where it is then grilled over charcoal. When the dish got its start, it was made primarily with minced lamb mixed with tail fat. Other spices from the region, like coriander and cumin, are mixed in before the meat is shaped over an iron rod. (Think of it like forming a burger patty over the rod, only in an oblong, thin shape for quick, even cooking.)

The reason for its shape also has a lot to do with how the kebab is served. While many kebab meats are eaten directly off the skewer, Adana kebab shares another similarity with the gyro in that it is traditionally eaten on a piece of flatbread. The Turkish flatbread (lavas) is very thin and crisp, and a traditional accompaniment to the kebab is a side of charred red bell peppers with tomatoes and a salad.

Perhaps the most appealing aspect of the Adana kebab is that it can be prepared in an infinite number of ways. If you are watching your calories, you can use less fat in the mix. If you aren’t a big fan of lamb, then ground beef may be more to your liking. And if you’re not crazy about onions, you can omit them or add something less pungent. The options are limitless.

To end, here is a traditional Adana kebab recipe. This is how most would prepare it in the Turkish culture. Keep in mind, though, that you are free to add and take away where you see fit.

Minced lamb meat, mixed with fat to about an 80/20 ratio (1 to 1 ¼ lbs)
1 medium-sized onion (diced)
1 red bell pepper
½ tbsp each of coriander and cumin
1 tbsp each of butter and biber (red pepper paste)
Olive oil
Salt and pepper (to taste)

First, seed and stem the red pepper and puree it. Next, combine the meat, butter, spices and paste into a bowl, along with the diced onion and red pepper puree. Salt and pepper to taste, mix well, and form your kebab patties over an iron rod or just free-form them. Before grilling, rub them with a light coating of olive oil. Grill over medium-high heat, turning frequently until done.

Feel free to make the recipe your own, but also remember that the original Adana kebab is famous for a reason.