Differences and Similarities of Turkish and Middle Eastern Cuisine

Dolma, for example, is a name given to vegetables such as green peppers, cabbage leaves, or grape leaves stuffed with spiced rice. Dolma is a Mediterranean dish that the Lebanese seasoning with flat parsley leaves in the Middle East. The Turkish version uses dill to season dolma.

Turkish cuisine is a refined product resulting from centuries of experience. It has a pure quality. Simple recipes, quality ingredients like olive oil, and variety are the makings of a delicious Turkish meal.

Lamb is the basic Turkish kitchen meat. The meat can be marinated or plain, grilled or stewed. Many countries have borrowed the “sis kebab” idea of threading the meat on a skewer and grilling over charcoal. 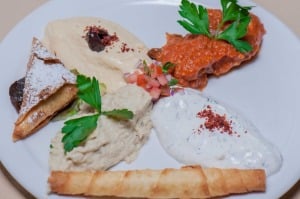 “Baklava” is a famous Turkish sweet known throughout the world. Milk is the basic ingredient in many Turkish confections. Turkish coffee is dark and thick. Served in small cups, imbibers drink it with no sugar, a little sugar, or lots of sugar. Turkish coffee is delicious with or without sweetener.

Lentil soup is the most common Turkish soup, but other rich and substantial or light soups are the first courses of a meal. Preparation of Turkish soup usually begins with a meat stock.

Food blogger, Bethany Kehdy, who has written a Middle Eastern cuisine cookbook, admits the food is an acquired taste. When talking about some of her favorite dishes, one can see the similarities and subtle differences between Middle Eastern and Turkish cuisine.

Kehdy describes her favorites as simple and rustic. She cites a lentil stew, called “M’ Jada rrah,” having caramelized onions served with a zesty cabbage salad. Another dish she likes is a fermented burghul porridge made with yogurt and sun-dried on the rooftop for seven days in the fall before ground into a fine powder.

“Kebab karaz” is a Middle Eastern rendition of kebabs also known as dessert candy or cherry kebab. The Syrian dish gives a new slant to the famed meat stick. Pomegranate pips and sour cherries render the meat a blood red color with a sweet and sour taste.

The “Baklava” recipe dates back to the Ottoman Empire. Buttery filo pastry, nuts, and a dressing made of honey and sweet syrup go into the Middle Eastern recipe.

Care is taken so that stuffed vine leaves dolma is not slimy and flaccid because it was left in the sun too long. Juicy vegetables or succulent lamb accompany dolma.

Some dishes are region specific and flavoring techniques change from one country to the next. Cooks frequently use chickpeas and olives throughout the Middle East. Flatbread is popular everywhere. Typically Middle Eastern food is aromatic and flavorful. Spices such as caraway, turmeric, nutmeg, and cumin achieve strong flavors unique to the region.

The Turkish cuisine reflects the diverse use of vegetables. Cooks decide whether or not to add meat. Olive oil is the ingredient common to dishes without meat. Serving these dishes cold is the typical presentation. The Turks are fond of meat also. With added meat, the presentation of these vegetable dishes is a hot serving.