Moussaka is a dish made from eggplant or potato (depending on the country) and is a part of Ottoman Empire cuisines. There are many variations of the dish but Turkey and Greece have made it particularly popular. The Turkish variation makes Moussaka a casserole style dish with the eggplant getting sautéed. It is consumed at room temperature or slightly warm (not hot). The Arabic version of Moussaka is eaten cold while the Balkans version involves a layered dish this is served hot. Moussaka comes from the Greek ‘mousakás’, Arabic ‘musaqqa’ah’ or the Turkish ‘musakka’, all of which mean ‘chilled’. 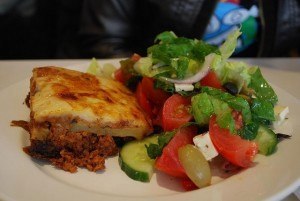 • What Goes In The Moussaka? – The Turkish version contains minced meat, onions, tomatoes, green peppers and eggplant which are sautéed. Some Turkish versions also include potatoes, carrots and zucchinis. It is consumed with Pilaf and Cacik.In the Balkans version, potatoes replace eggplants. The vegetables are layered in the pot first and then there is a layer of pork followed by another vegetable layer. This continues till the pot is completely up to the brim. The topping can be crushed cheese, tomato slices and bread crumbs. Then, some tomato sauce is added to the pot. The pasta Balkans variant replaces vegetables with pasta and the vegan version replaces all the meat with rice, sautéed onions and mushrooms.The Greek version also involves layering with aubergine, minced meat and tomato. The Greeks bake the Moussaka after adding a white sauce (Béchamel). A vegan Greek variant eliminates all the meat and just includes the eggplant, tomatoes and bread crumbs. Variants also involve adding sautéed zucchini, mushrooms or potato slices (part fried).The Levant version involves a cooked up Moussaka with eggplant and tomatoes. The dish is a bit like Italy’s Caponata. It is served on a mezze dish and is eaten cold. The Lebanon moussaka is a hot dish that contains chickpeas, tomatoes and eggplant.

• Why Do People Like Moussaka? – Moussaka is to Turkey and Greece what Spaghetti and meatballs is to Americans. It is a quintessential dish that every person from these parts has tried. The dish has a crunchy top but the sauce is the thing that brings out all the flavors. People like Moussaka because it tastes like an exotic version of lasagna (without the pasta). Also, it is extremely healthy because it has all the green vegetables. It takes around 2 to 3 hours to cook and, depending on the size of the pot or casserole, it can easily serve 6 people. Thus, it makes for a perfect family meal.

• What Are The Origins of Moussaka? – The origins of the dish are unknown. While Turkey and Greece have made Moussaka globally famous, they are the not the nations who introduced this dish. According to the Greeks, this dish was introduced by the Arabs when they brought the aubergine. However, Arabs and people from Lebanon believe Moussaka to be a Greek dish. Despite the confusion regarding its origin, there is an Arabic cookbook from the 13th century called ‘The Baghdad Cookery Book’ and this book includes a dish that could be the ancestor of Moussaka. The dish is called ‘Muqatta’a’ or ‘Maghmuma’ eggplant, onions, meat and seasoning. It also includes saffron and is a layered dish. This recipe was proposed by a food historian.