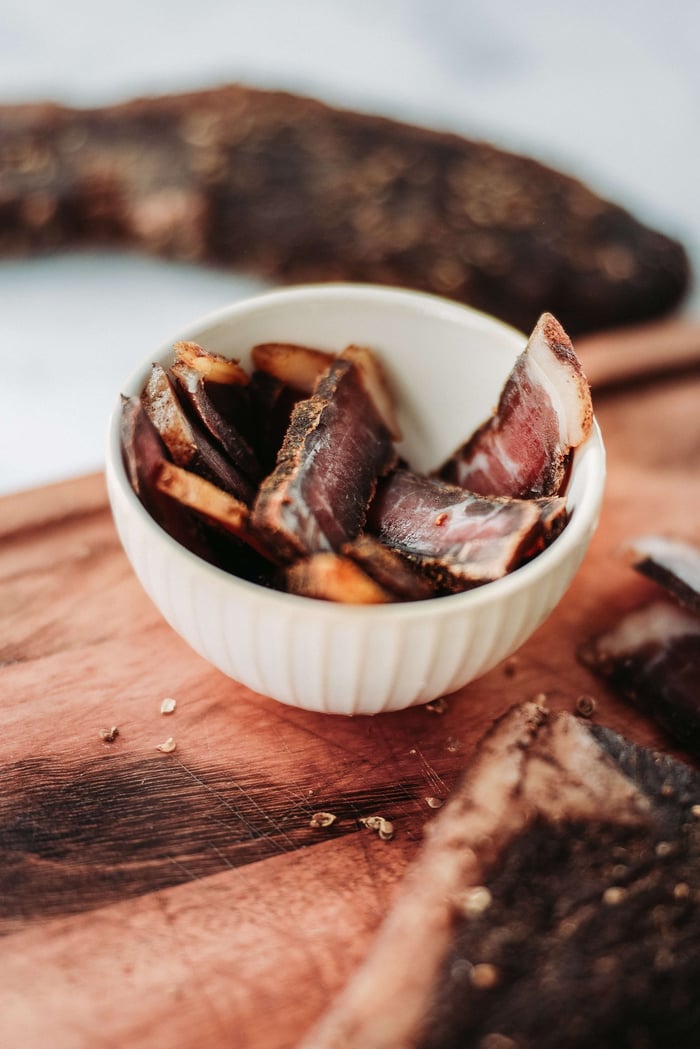 The use of salt and spices to cure and preserve meats has been used for centuries, as far back as the Ottoman Empire. Pastirma, known by many names, pastırma, pastourma, bastirma or basturma, is a salt and spice cured beef that is eaten in Turkey, however the Italian luncheon meat called pastrami is made with the same methodology.

The word “pastirma” literally is defined “being pressed”, since Turkish horse riders would ride with the spice-rubbed meat in pockets on the sides of their horses. The meat would be pressed by the rider’s legs as he rode.

The Different Cuts of Meat

Pastirma is usually made of cured beef, as that is what is preferred, but can also be made of goat or lamb. The Turkish dish can have varying levels of quality depending on where the cut of meat it is taken from. A medium sized animal can produce up to nineteen different styles of pastirma, a large animal twenty-six. The cut of meat will also affect price. Higher quality cuts of pastirma are considered a delicacy among Turkish elite.

How is the Cured Beef Prepared?

Istanbul and Adana are areas that consume the largest portion of pastirma, where the meat takes a month to prepare. The fresh meat of the animal is left to rest in the open air for 4-6 hours before it is salted and left to dry for 24 hours on each side. The salt is then washed off and the meat is left outside to dry for up to two weeks. A paste made from a spice mixture, known as çemen is applied to the meat before it is left to cure for another day or two. The paste, çemen, is made from fenugreek seeds, garlic, and chili pepper. The spice and salt are important to protect the meat from the air, which would spoil it. The meat is then rinsed of excess spice paste and left to dry for another day or so. After this step, the pastirma is ready to eat.

Pastirma is sliced thinly and often grilled, eaten with sourdough breads, fried with eggs and tomatoes, or diced to be added to a popular bean stew.

Pastirma has enjoyed a long, colorful history since the Ottoman Empire. Writer Evliya Çelebi praises the cured beef exquisiteness in his 17th century Book of Travels. After all of these years of extreme popularity, there’s no doubt the art and cuisine of pastirma will continue to entice palates across the globe.