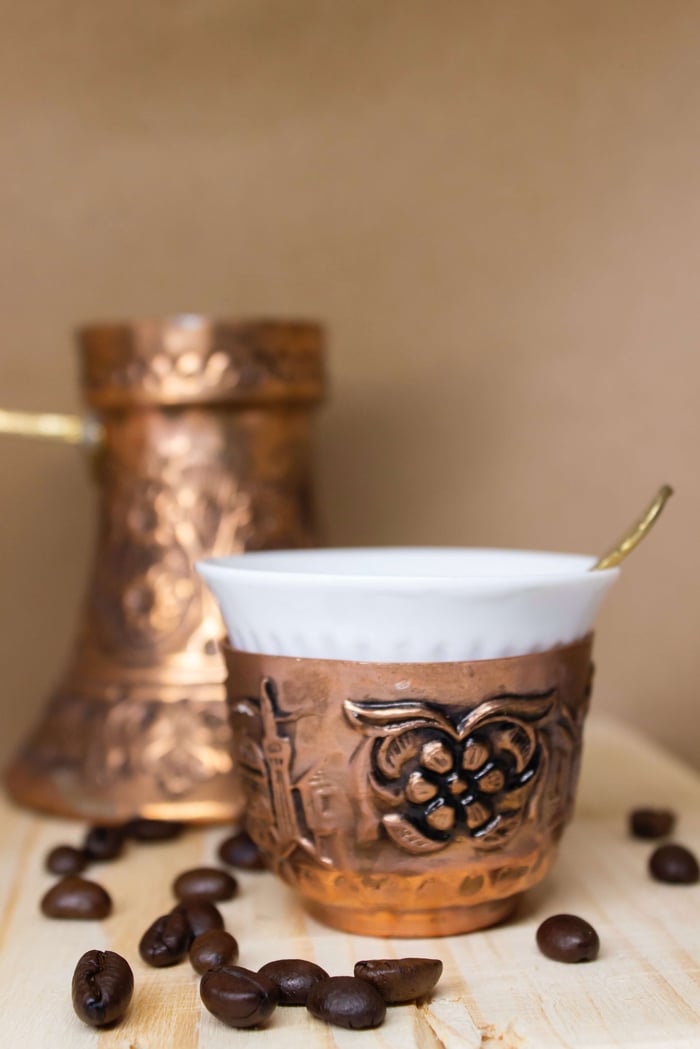 The Rich History of Turkish Coffee

If you’re a coffee lover, you’ll know the sheer pleasure of discovering the perfect cup of coffee. If you’re willing to take a step outside of your usual cup of joe, Turkish coffee is a great place to start. It’s smoky, it’s velvety and full of rich flavor. All of these characteristics that come with the beverage can be attributed to the way it’s made. Starting with coffee beans ground into a fine powder, these beans are boiled in an ornate little brass pot called a cezve. When the coffee is ready, it rises and bubbles, giving off an enticing aroma unlike anything else.

Turkish coffee has six different levels of sweetness, from very sweet to black. Sometimes, a unique spice called cardamom is added to the coffee while grinding the beans, giving it a distinctive flavor.

The tradition of Turkish coffee started around the year 1540 when Sultan Suleiman the Magnificent popularized it in his court after being introduced to it by the Ottoman Governor of Yemen, Ozdemir Pasha. The hot drink quickly became a vital part of Suleiman’s palace cuisine, and was made by coffee-making professionals called “Kahveci Usta.” Soon, members of the elite scrambled to get their hands on a taste of this novel beverage.

At one point, the Ottoman Grand Vizier Koprulu outlawed coffee houses in 1656. Turkish coffee became a controversial topic, which came as a shock to the Turkish people who frequented coffee houses and considered it to be an essential part of everyday life. Those caught violating the coffee ban suffered extreme consequences – punishments ranged from beating to drowning. Coffee houses were viewed as dangerous, ideologically and politically, since they served as hotspots for discussing politics and even subversive efforts to overthrow the Sultan. Women socialized with coffee and sweets, while men addressed current events and played backgammon.

This intense cultural involvement of Turkish coffee molded into a drink that holds the lifeblood of Turkish society. Tradition dictates that “drinking one cup of coffee together guarantees forty years of friendship.” 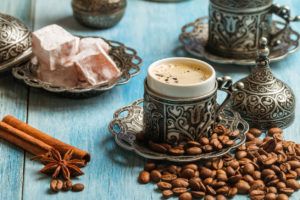 Turkish coffee is steeped in rich history and tradition, and is still firmly rooted as an emblem of socialization between friends, family, and curious travelers.

Historically, marriage customs and gender roles rested on preparing Turkish coffee. Women received intensive training on the technique of making the perfect cup and were even judged by prospective husbands and mothers-in-law by their skills.

Potential new brides would add salt to their ordinarily sweet drinks as a measure of her level of interest in the man. If she added a lot of salt, it meant that his chances didn’t look good. But if he drank the whole cup of salty coffee afterward, it was a testament to his manliness and his readiness to marry her.

To this day, Turkish coffee continues to bring friends and family together; bonding loved ones over a cup of this traditional drink. Modern-day Turkish coffee houses continue to exist as cozy meeting places for cultured citizens and curious travelers.

“Fal” is the Turkish tradition of reading the future from coffee grounds left over at the bottom of a guest’s cup. Otherwise known as tasseography by academics, reading these grounds is one of the oldest and most widely practiced fortune-telling traditions in the world.

During these readings, women will always ask, “Will I meet my true love?” Some might find these fortune-tellings corny or fake, but they are often less involved with predicting what will happen a few months from now than identifying the blockages in his or her life that are preventing a person from reaching their goals or attaining happiness.

Turkish “fal” is a bit like seeking advice from a life coach, but with a touch of celestial flair. The following is a list of popular pictures found in coffee grounds, decoded:

This weekend, why not try a cup of famous Turkish coffee at Bodrum at brunch? We offer a variety of dishes and desserts that will pair well with your hot beverage. So what are you waiting for – get together with some friends and chat over a cup of coffee steep in tradition, and experience an authentic Turkish meal just like a Mediterranean native.