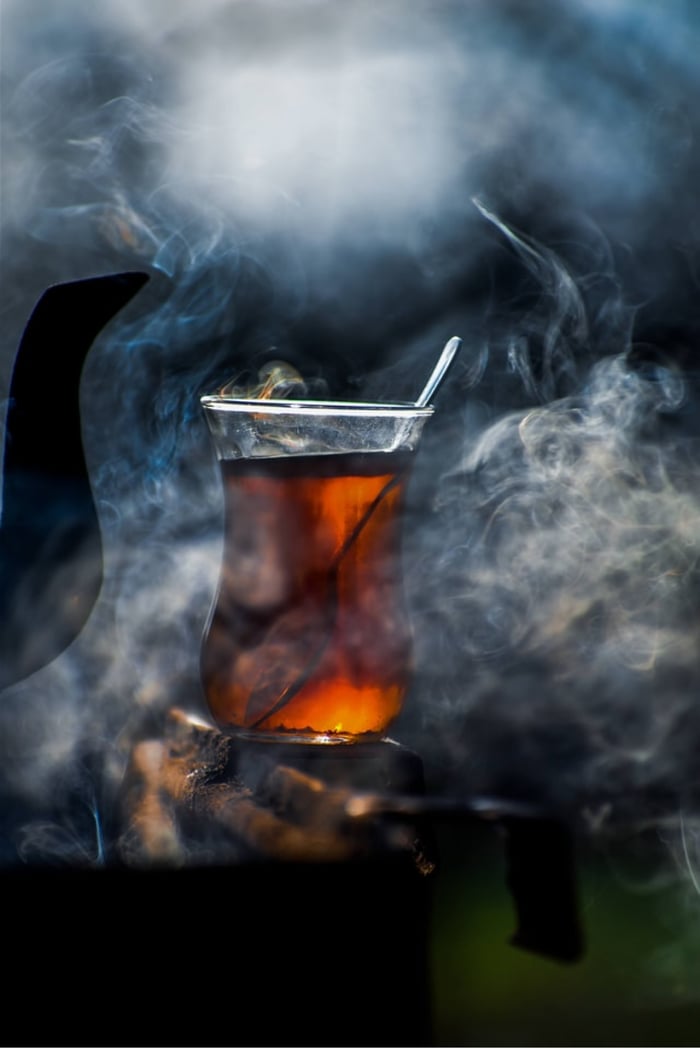 Turkey is one of the few countries in the world that comes close to matching the British love for tea drinking, and in fact it has been said that in Turkey, teatime is considered a philosophy, a science, and an art all rolled into one. Much of the Turkish tea is grown in a northern section of the country close to the Black Sea, and the richly black leaves produced there impart a deep red color to the tea when brewed.

This is in fact, one of the major appeals of the tea to the Turkish people, most of whom love sipping their deep red tea from an Inci belli bardak, which is a ‘thin belly glass’. This vessel which has the shape of the tulip, is somewhat reminiscent of the reign of Sultan Ahmed III, which is often referred to as the Tulip Era. Many of the textile industries as well as the carpet industries, adorned their products with a wide variety of tulip patterns during this period. You might also recall the extensive tulip gardens in the area around the Golden Horn of Istanbul, and the current logo for Turkish tourism features tulips in worldwide advertisements.

You can obtain Turkish tea in practically every shop in the country, and no home or office is without it, so that even a casual visitor to the country cannot fail to be impressed by its prevalence. Wherever you might stop to pay a visit to someone in Turkey, you’re very likely to be offered a cup of tea while you’re accomplishing whatever your task might be. Turkish tea cups and glasses come in many different sizes and shapes, but by far the most popular is the Inci belli bardak, which is often adorned with delicate etchings and patterns.

The way most Turks brew their tea, is by using a teapot and kettle combination which is referred to as a caydanlik. Just like the teacups and glasses, there is an amazing variety of choices you can select from for your tea brewing, including porcelain, plain, patterned, stovetop, electric, stainless steel, a budget version, and a really extravagant version.

The contraption is made of two parts, one of which is used for boiling the water, and one which is used for brewing the tea, and together they do a very nice job of producing a hot and tasty concoction. Tea leaves are placed in the upper part of this teapot, with the water being placed in the bottom. When the water begins to boil, it reaches the tea leaves in the upper part of the teapot, and if necessary, more water can be added to the bottom part, after which the tea is left to steep for about 20 minutes.

Tea is consumed by Turks right at the beginning of the day for breakfast, and regardless of where you go for breakfast in the country, you can be sure that a large pot of tea will be placed on your table without you even asking for it. Any restaurant you go to in Turkey will also probably serve you tea and cakes after your meal, or possibly tea and biscuits or borek, which are sweet Turkish pastries, much loved in the country.

Tea is much more than just a beverage to Turkish people, and in fact is more of a shared activity, so you will rarely see anyone in the country drinking tea alone. Tea drinking time is the time of day when housewives get together and reveal their secrets and their troubles to each other and share laughter and commiserate.

Families come together at meal time to share tea as well as a good repast. If you happen to visit a Turkish park, you are bound to see families all throughout the area gathered around tables, perhaps nibbling at a treat or a full meal, but almost invariably, you’ll also find them sharing a pot of tea. Virtually everyone in any profession you care to name, and persons of all ages, genders, or any other distinction you care to make – they all share a love for tea.

To prepare the Turkish tea, just start by adding water to the bottom level of your caydanlik. Next add 3 teaspoons of loose tea to the top portion of your teapot, and then put it on a medium heat until the water begins to boil. Once the water starts boiling, you can add additional water to the bottom tier, and then replace the teapot onto the burner, so it can begin to boil again.

Once the water has begun boiling, you should move your teapot onto the smallest burner, and allow the tea to settle for about 20 minutes. When you notice most of the tea leaves have sunk to the bottom of the teapot, you’ll know that the tea is ready to be served.

Some people prefer to warm their tea glasses before pouring the tea in, as a way of preparing the glass. Pour some of the tea from the top tier of your teapot into the glass, and serve with either sugar cubes or loose sugar, along with a teaspoon for each drinker. Like Turkish Coffee – once you try Turkish Tea, you never go back!